Did John Ziegler beclown himself . . . 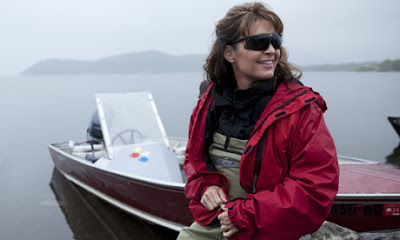 . . . or stab Sarah Palin in the back?
In a recent article at The Daily Caller, Ziegler says that Sarah is unelectable. And not only that, if she foolishly enters the presidential race, she'll guarantee a second term for Barack Obama by weakening the entire field.
Now Ziegler, who shot to fame as the producer of the documentary Media Malpractice -- a damning look at the lengths the left-wing media went to to destroy Sarah Palin's political career, knows full well what he is saying will be the lead on every lefty newssite and tv show.
So what was he thinking? Is he really concerned about the upcoming election? Or is something else at work?
Ziegler has a history of burning bridges at radio stations and other places he's worked in the past, and then lashing out via manifestos and such to salve his wounded pride.
In 2010, he sent an e-mail to Sarah Palin giving unsolicited advice on some topic. In what may be Sarah's only e-mail gaffe that's come to light, she did the dreaded "forward all" miskey and attached a snarky comment about everyone having to endure Ziegler's e-mail. Of course, Ziegler got a copy of that and pouted like a little baby
And now it's payback time. Like a pubescent school-girl, he's lashing out at the varsity star who snubbed him by scribbling nasty things on the walls above the drinking fountains.
I'm surprised he didn't shop this manifesto to the usual George Soros run media outlets. My gut feeling here is that Ziegler thought that his amazing documentary entitled him permanent access to Sarah Palin's career . . . to be a sort of implicitly trusted advisor or Yoda figure for her. Think Karl Rove for George Bush.
But faced with the fact that Sarah Palin isn't doing anything by the numbers in her political life, including turning herself over to one or more advisors (the debacle of McCain's people backstabbing her probably helped this), Ziegler has decided to lash out, as he has for his entire professional life, at the one person who is responsible for him having any name recognition whatsoever.
pity
Update:
Okay, because I can't even comment on my own freekin' blog #@!!?*&%!! let me respond to my only comment --
My poorly written analogy goes as follows: Ziegler is the prepubescent girl (as in acting like a little girl) who feels snubbed by the HS varsity star - Palin. So in his op-ed at the Daily Caller, he's lashing out petulantly -- like a kid scribbling nasty things above the water fountain at school where everyone will see them hoping to embarrass the object of his infantile scorn. See?
Not a professional writer here folks, you've got to work with me a bit.
Posted by postaldog at 9:16 AM

If Ms. Palin is like some HS star who scribbles nasty comments about others on the wall, who is the prepubescent?

postaldog
Tampa Bay area, Florida, United States
Just a hardworking, single father, with way too many opinions on way too many things and not enough time on my hands